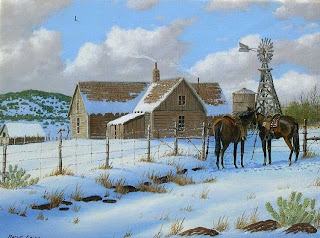 My great uncle, "Uncle Ed" would recite this poem at every Christmas program at the Otter Tail Nursing Home. He memorized it in grade school and when in his 80s, he would stand, fiddle with his cane, near blind and recite it in a clear crisp voice. A bit of a ham, when he was done he would recite another poem but that's for another time, this one is my favorite.

Little Breeches by John Hays
I don't go much on religion,
I never ain't had no show;
But I've got a middlin' tight grip, sir,
On the handful o' things I know.
I don't pan out on the prophets
And free-will, and that sort of thing,
But I b'lieve in God and the angels,
Ever sence one night last spring.

I come into town with some turnips,
And my little Gabe come along,
No four-year-old in the county
Could beat him for pretty and strong,
Peart and chipper and sassy,
Always ready to swear and fight,
And I'd larnt him to chaw terbacker
Jest to keep his milk-teeth white.

The snow come down like a blanket
As I passed by Taggart's store;
I went in for a jug of molasses
And left the team at the door.
They scared at something and started,
I heard one little squall,
And hell-to-split over the prairie
Went team, Little Breeches, and all.

Hell-to-split over the prairie!
I was almost froze with skeer;
But we rousted up some torches,
And sarched for 'em far and near.
At last we struck hosses and wagon,
Snowed under a soft white mound,
Upsot, dead beat, but of little Gabe
No hide nor hair was found.

And here all hope soured on me,
Of my fellow-critter's aid,
I jest flopped down on my marrow-bones,
Crotch-deep in the snow, and prayed.
By this, the torches was played out,
And me and Isrul Parr
Went off for some wood to a sheepfold
That he said was somewhar thar.

We found it at last, and a little shed
Where they shut up the lambs at night.
We looked in and seen them huddled thar,
So warm and sleepy and white;
And thar sot Little Breeches and chirped,
As peart as ever you see,
"I want a chaw of terbacker,
And that's what's the matter of me."

How did he git thar? Angels.
He could never have walked in that storm;
They jest scooped down and toted him
To whar it was safe and warm.
And I think that saving a little child,
And fotching him to his own,
Is a derned sight better business
Than loafing around the Throne.

The Best Christmas to you all

Jerry
Posted by Jerry at 5:41 AM No comments:

The Best of the holidays to you!! 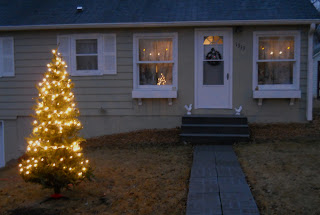 This winter is sure a surprise....48 degrees yesterday! As you can see from the picture we can have Christmas without the white stuff. I have settled into town life. I can and have walked downtown to browse, shop and go to the Public Library..Large print books..I loved to read and have started up again. I read a bit each day till my eyes are tired.... The last two have been murder mysteries. I like a book to grab my attention, so I can't put it down. The other day--- induced by the warm weather I got out the nursery books...........what to plant where. I have a pickup load of perennials and shrubs to bring in from the farm.......but buying a few too......Definitely getting a couple Vanilla Strawberry  Hydrangea shrubs for the front yard 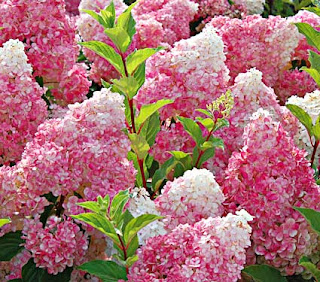 I will stop, as the list could go on and on

With a very meager box of Christmas decorations and no real room for a tree, I set around with what I had. An old large tree top angel with lights, 2 strings of mini lights and a red/green embroidered stocking. At the Dollar Store I bought some silver and red glittery balls 3/$1, silver garland. I had some red and silver glittery butterflies and two battery operated butterfly candles from LTD........
I chose my pony wall between the kitchen and living room to I set up the angel, strung out the mini lights...........as I am winding the silver garland through the lights - I thought- I hope these lights work--I keep on with the silver garland- having a little faith. I took white thread and suspended the butterflies..in different poses and heights from the ceiling, the 2 butterfly candles I set by the angel. I personally think it looks rather grand! 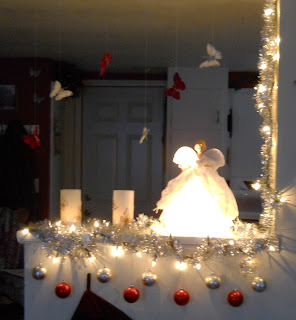 Patient and care free holiday decorating to you all
Jerry
Posted by Jerry at 3:54 PM 1 comment: