Well the Eggs are set!

We set the largest best Blue Laced Red Wyandotte eggs on Saturday the 29th. Nessie handed me each one and I put them in the racks. Nessie managed to get 2 extra eggs in a couple rows so we have 26 eggs in it. Nessie returns on Feb 19th for a 4 day weekend.....chicks will be hatching!  Sunday monring Nessie looked in the incubator window...."Granpa none are cracking yet" I said "no they won;t start to crack until you get back"  21 days is an eternity to a 7 yr old.
This morning we got 5 inches of new snow so far...still snowing..........Spring where are you?  Lambs and kids in 57 days so I wait........impatiently of course 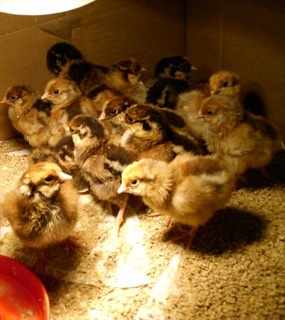 I plan to set 24 eggs on the 29th, when our 7 yr old granddaughter Nessie is here. And she'll be back 3 weeks later for a 4 day weekend when Grampa will have BLRW chicks hatching!
Born to struggling teen parents, we have Nessie 60% of the time until she started school. My eldest son is troubled and estranged, but we have a great friendship with the mommy. I took Nessie out to the barn in her baby carrier....she grew to loves the sheep, goats and chickens. Now we are blessed to have her every third weekend or more. Weeks at a time in summer. Hey its the only one we will probably have,,,,,,sweet, caring, well behaved- For the first time at 18 months, she stood hanging onto my pant leg whining as I cooked,  I looked down and said "Grampa doesn't like that"..she stopped and has never done it since. Always in a good mood- she wakes up smiling every morning. A real joy, a very quick study, with insight beyond her years.......yes indulged but not spoiled.
Smilin'
Grandpa Jerry
Posted by Jerry at 4:16 PM 2 comments:

This could be said of our Shetlands, aye?

Because of   Love
Said to be a true story

HI my name is Jerry and I am a Chickenholic

Well its done and the dust has settled. I sold all of my OEGB,  EE hens, EE chicks and Silkies. And I even took down a chicken pen! remodeled the big main pen a bit

Here's what I have left.....pictures taken this morning,,,,very cold day here.
My Blue Laced Red roo "Beach Boy" Five BLRW Splash hens, 2 black production hens
20 BLRW 3 month old chicks...looks like 9 roos and 11 pullets, and four 3 month old black production pullets.......that's it!  I only need 8-10 eggs for the house a day! So I will have
sell some nice correct  BLRW pairs in Spring 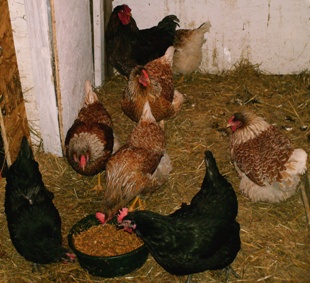 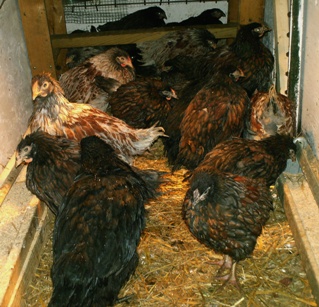 I have decided to reduce my chicken numbers,,,,,,,,doesn't sound fun>>> but it is refreshing. My Blue Laced Red Wyandottes--in my opinion-- are the most beautiful of all the breeds. Working on that premise, I am selling all the others. On Thursday we are meeting a 4-H family in St. Cloud. They bought all my Old English bantams and 3 Silkie pullets. It  fun to get youngsters started in bantam keeping. Later when my younger BLRW are ready to lay,  I am selling my Easter Egger hens and youngsters.  The Less is More- theory. I will have only BLRW- 12 hens and my roo "Beach Boy". I did keep a few Silkies as they are the best broody hens--- my roo Big Boy, Muffin and 2 pullets.

Now this is what I am talking about!!  7 month old   Beach Boy in his glory 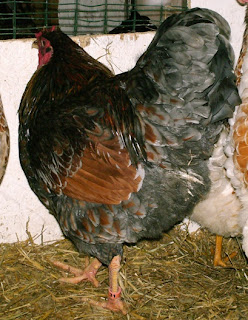 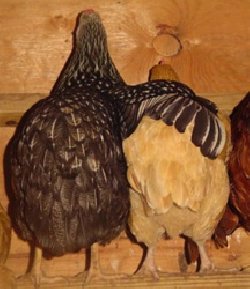 Before the end of the year and the first few days of the New Year, winter had largely missed us. Six inches of snow and no winds, we were marveling an our easy winter. Friends further south were not fairing so well. Then we got dumped with snow, high winds, drifting snow. Our Interstate from Alexandria (5 miles from our farm) to Fargo ND was closed for 60 plus hours. That's 100 miles of Interstate. Truckers waited it out in truck stops and wayside rests. A nearby fiend wrote on 12-31-10:
"What a day we had yesterday. Started with a freezing rain warning, added a freezing fog warning, then a winter storm alert and now a full fledged BLIZZARD WARNING!!! The temp this morning was 34 degrees and the bottom is dropping out like a rock. Snow was coming down sideways instead of falling down. Could barely see out the windows at all."

Today its 15* below zero, the sun is shining and the hoar frost is twinkling. This begrudged Minnesotan has to say from inside the house it looks pretty! 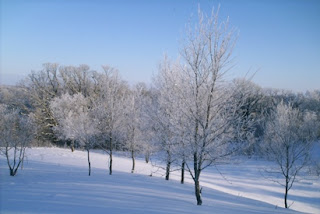 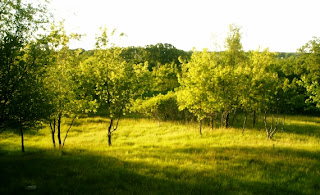 Till later
Jerry
Posted by Jerry at 7:47 AM 1 comment: