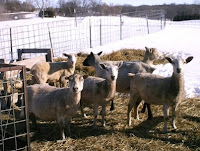 Its been two weeks since my ewes were sheared. I am always amazed how the ewes
"shrink" after their fleece is clipped. My girls have spent the last two weeks in the barn.
I thought oh what have I done! They were cold and pink. I sheared early as they were purchased bred and I wanted to see their udder development and body condition.
I was waiting for a nice sunny day to let them outside.

Today was the day! A beautiful sunny Minnesota Spring day. Hey I can hope the winter is over.
The ewes spent all day out in the sun coming in only briefly for their grain.

The maternity pens are ready and my ewes are being carefully watched. Lambing is one of the best times of the year........so I am impatiently waiting... I have two older Shetland ewes and 5 Shetland cross ewe lambs just coming a year old. Shadow a 2yr old Shetland/Romanov and yearlings Charm and Cher are definitely due soon. They are making udders and are large in the back end. Shadow is carrying quite a load, triplets? The other four were bred later so they are due April/May. I will just have to wait and see.

I started counting the days till April 1st back in November...started at 146 days. Winter is not my favorite season. Minnesota born and bred. My German ancestors came to Minnesota because it reminded them of home. I think "Hey you left home, couldn't you have tried a Southern region?" So tomorrow is March 1st, 31 days till the first of April. Now for a bit of a reality check........winter 2008-2009 we had 3 snow storms in April. We had the driveway plowed and it needed it..no oh it will melt on April 1, 14 and 28.
An old friend told me that the deer were in rut before deer hunting season began, so fawns the end of March and fawns are never dropped in the snow. So I am looking forward to a snow less April.......like we use to have when we were kids.

I see Gail is back. She has been busy, due in part to answering all my emails! Nice pictures Gail.

Flash and his harem 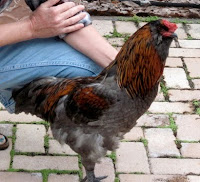 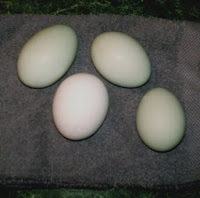 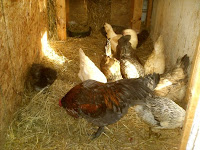 I keep Easter Egger chickens for their many colors. It makes for a colorful flock.
The blue eggs are a bonus. Flash is a beautiful Americauna rooster. He was a rescue from the
butcher block. I got him form a friend, he was too pretty to eat. He is tame.
Two weeks ago, we found him 9 EE hens. They settled in easy and continued to lay.
(a little overboard) I have a bunch of chicks 5 weeks old, 22 st run EEs and 3 Blue Copper Marans pullets. TheBlue Coppers should across well with Flash, T
he theory is "to see what I can get"
Ah with the sheep too. The markings and colors combos are endless.
Posted by Jerry at 2:05 PM 1 comment:

I just started this Blog 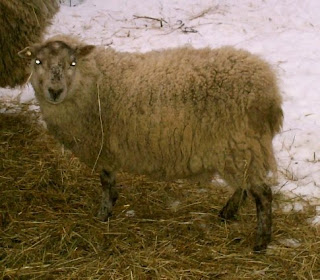 The BFL/Shetland "mule' is Opal and her Shetland dam Maybeline
I added the pictures last to be at the bottom and they are on the top...
I have been reading everyone else Blogs from Gail's list and decided I would start my own.
So I clicked create a Blog and foraged ahead. I do not proclaim to be a computer whiz but it seemed easy to do.
I had sheep for many years. A commercial flock of Dorsets and Dorest/Finn crosses selling market lambs and 'giving' the wool away to the shearer (15 cents/pound). A new job moved us across Minnesota to St Charles near Rochester. We lived in town (I prefer country) so the sheep were sold.
I was a bank manager. Spring 2003 I went to the Clinic with a lump on the right side of my neck. I was refered to Mayo. They discovered a lump on both sides of my neck. The lumps were cartiod body tumors--not cancerous- like a blood sac/mass in the fork of the cartiod artery. The lump on the left which was not visual from looking at me was the size of a pop can. It was causing slurred speech and air way constriction. So it was decided to remove the big one first.....it was the size of a pop can.....I was a big boy I thought I had a fat neck! It was suppose to be a easy surgery and back to work in a month, Surgery to remove it did not go well. Due to the excessive fluids pumped in to save me, I lost most of my vision...now I see out of the lower half of my right eye no side vision, no sight in my left eye I have less than 20% vision. At first I bumped my head a lot! Swallow nerves were severed so I can't swallow anything. So I have a PEG feeding tube. not as bad as it sounds. One vocal cord and one side of my tongue doesn't work. I challenged myself, learning to talk, walk and learn to see as well as I can. I care for my sheep, chickens and a large perennial flower bed. Positive attitude not one to sit and have a pity party.
So that's why I am 'retired' and hobby farm.
First I had Icelandic sheep, great sheep but not friendly and hands on. I sold them and bought Boer goats. You shear sheep and they warm up the barn, with goats the barn was always cold.
I got tired of being bruised from thier horns and wrestling 200 pound does. So December 2009 I sold the goats. Next day I purchased four grade Shetland and three BFL/Shetland cross ewes.
I sheared my ewes early as the lambing dates were guessimates. So I could see the udder developement. Beautiful fleeces. I skirted my fleeces, hand picked out the VM and sold them all in one week! Next year mid April lambing and I will shear end of March. With our Arctic temps the ewes are in the barn. They and I are waiting for a warm sunny day so they can go back out and be in the barn or outside as they wish.
Shetlands are wonderful. Small, easy to handle and very tame. One ewe "Maybeline" loves crackers and she loves a good petting. Now that's my kind of sheep! By their look, they will lamb end of March and into April. This summer I am adding a ram lamb and more Shetland ewes.
Till later
Jerry